And all they really needed was an Irish coach-go figure 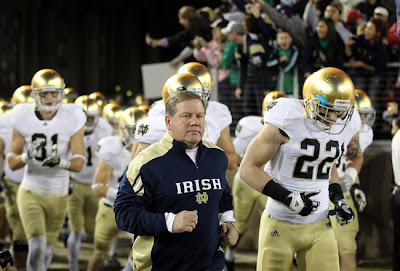 While growing up, our household's loyalties may have been with Indiana University for basketball, but I was all about Notre Dame football.  This was particularly true in my college years as the campus was but a wee stone's throw from mine and many of my friendships had connections back to the university.  One of those connections resulted in a memorable meeting with Anthony Johnson from Notre Dame's Holtz-era.

When I wrote this post in 2007, We Are Done, about a history-making game I attended (and not in a good way), I said "a great school deserves a great football program".  Well, if the previous 7-0 winning streak for the Irish didn't prove that the glory has returned, certainly a win over Oklahoma on Saturday, in a big way I might add, has shown that Notre Dame is a football powerhouse once again.

After years of ND's head coaching position looking more like a turn-style to certain purgatory than salvation, I think that it now seems all too obvious with Brian Kelly......all they really needed was a head coach with an Irish name.  Go figure.  Go Notre Dame.
at October 29, 2012 No comments:

It  was a warm October afternoon, much like today, when the best thing that has ever happened in my life unfolded before me.  Fourteen years later....through a lot of ups and downs.....God continues to show me just how lucky I am.  And if I could attribute the strength of those fourteen years to anything other than our common love for each other and God, it would have to be the examples we have in our parents.  This year marks 100 years combined wedded experience between our folks.  That's a lot of love, and a lot of wisdom.  What will 50 years look like for us babe?
at October 24, 2012 2 comments:

This summer the family got away for a few days to southern Indiana.  It seems that given the options, we almost always choose to vacation in the Hoosier state.  Go figure.  Earlier this summer we were at Turkey Run, a halfway point between family graduations in Greencastle and Lafayette.  Having the hiking trails of Turkey Run and rippling waters of Sugar Creek as a stopover point is a pretty good deal.

In August we headed further south and went to McCormick's Creek State Park, visited with some friends in Bloomington, stayed in Corydon, then visited the Falls of the Ohio State Park before making a b-line back home.  Corydon just oozes Indiana history, and being the Hoosier heritage geek that I am....I soaked it up big time.  Our trip included stops at our first state capitol building, the governor's first residence, and the formerly massive elm under which the state constitution was adopted.  "Constitution Elm" is but a large stump today.  There are parallels I could draw here, but I'll keep this positive.
﻿ ﻿
Lest you think it was all history, the family also played a round of "black light golf" complete with 3D glasses and found one very remarkable old fashioned candy store/ice cream fountain.  But then, I guess I would also have to include our visit to the only Civil War battlefield site in the state, on a hill on the south side of Corydon, where Morgan's Raiders clashed with the local militia.

And we continued that drive south of Corydon, all the way to Boone's Cavern.  Squire Boone, the brother of Kentucky's famous son, Daniel, established a farmstead around a large cavern he discovered.  It was our kid's first cave experience.  Aside from some kicking and fighting, we did all right.  I had been in the cavern back in 1996 with a college buddy.  Since that time a portion became too unsafe for the owners' insurance company to accept responsibility for, so the hike in and out, while still worth it, was a bit repetitive....which may have led to some of the fighting. 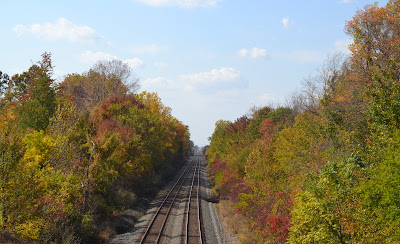 I crossed this bridge a few weeks ago, which caused me to stop in my tracks and snap a few photos.  And then it reminded me of something I wrote a long time ago about this same location.  It was the beginning of an essay I had written in architecture school in 1995 entitled "What constitutes the understanding of Community".  This is the introduction:


Forgive the dialogue if at first it would seem trite or experiential only in the emotional context of "small town"; however, I must begin with this recollection I have and am reminded of again and again.

It was a fairly warm but breezy July evening with clear, starry skies.  Some buddies and I that had grown up together were out and about and up to no good.  We had dad's old pick-up truck that I had equipped with speakers you could pull out from behind the seat and place outside on the hood-should you want to play a quick game at the park.  We were outside of town on Oak Road where we crossed the legendary "spook bridge".  It was an old iron bridge with wood slats for a deck-it had been there for nearly 100 years I suppose, crossing the railroad below.

We stopped and looked back toward town where the railroad led.  We were in no hurry, so we broke out a couple six packs of Coke and pulled the speakers out and put them on the hood.  The three of us sat on the extra-wide handrail and talked about...whatever, school and girls mostly.  We could see the glow of our little home town, bouncing off my old school, and the grain elevator's flag hoisted high on a tower next to the tracks.  And wouldn't you know it, Mellencamp's "Small Town" came on the radio.  It was a modern Rockwell moment.

Well, two years later they tore the old school down.  The grain elevator has changed hands and there is no flag on top of the silo.  And just a year ago, after it had been condemned, they brought down the old bridge too.  Don't cry for our small town though-since then we've had an Arby's, McDonalds (and now a Burger King), along with two mini-marts open.....at the expense of two (now three, with our family's place) long-established restaurants and a family grocery that had been around since the 1920s.


There is a lot of sarcasm, I know.  But I ask, with what sense of community will this next generation grow up with?  Is my generation X the first to be so nearly completely deficient of community?  Or have we just simply redefined it?  So many factors play into the idea of community, it would be nearly impossible to explore them all.  The best avenue to "know" community is to be "of" the community.  Understanding community must begin with playing particular attention to the mundane experiential aspects of common life.  Understanding community is searching out the common-ness of life.  It comes from seeing a little league game at the local park, from listening to the farmers gather and discuss crop conditions over coffee at the local cafe.  It comes from being with some buddies out on a summer night drinking Cokes and gazing back toward town.  These combined define a place in which to experience "community".

Certainly the loss of aspects of our built environment can have a profound negative impact on "community".  These are the things that tie us to a place, that give rootedness to our lives, and provide in real concrete form aspects of the memories we have.  In this situation, it was both the beauty of the place and memories that caused me to stop on the new bridge that now crosses the tracks.
at October 13, 2012 No comments: 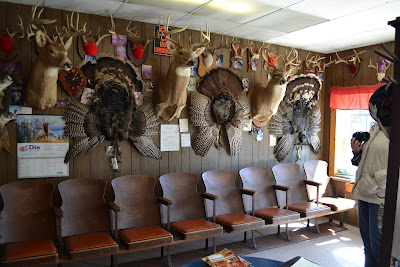 Such was the case when I landed in LaFontaine earlier this year.  LaFontaine is a little town between Wabash and Marion, Indiana, slightly off the beaten path after Highway 15 bypassed the burg years ago.  Taking an abbreviated walking tour of the town, it became evident to me that the folks here are very proud of their history.  But it was the barber, who called my touring partner and me into his shop, who took the prize for....well...."most bizarre" decorating. 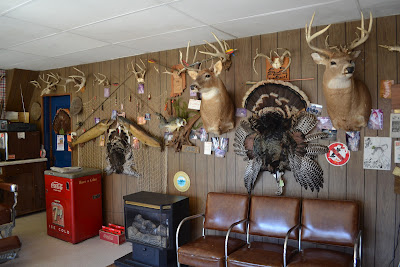 As I was lost in the jungle of taxidermy trophies on his wall, a certain distraction for anyone, he pushed a track into my hand as I'm sure he thought he had a soul caught in his cross-hairs.  I smiled back and said that God's arrow hit me many years ago........well, not exactly in those words.  And then I wondered about the poor souls hanging on his walls.

I'm not a hunter and never had the inclination to shoot a gun, really.  But I have to admit that his trophy-covered walls in this little downtown storefront put a big smile on my face.  So this post goes out to all my gun-totin', bow-pullin' buddies out there.  Happy hunting, wear some orange, and don't end up on anyone's trophy wall this season. 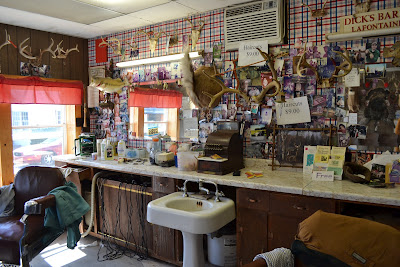 Email ThisBlogThis!Share to TwitterShare to FacebookShare to Pinterest
Labels: culture

A perfect place, a great couple, and one amazing wedding 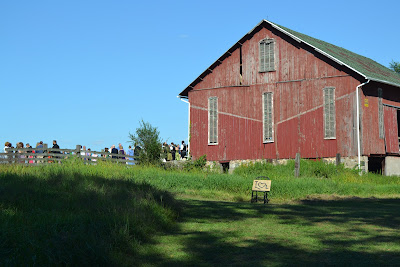 I remember shortly after we purchased the farm, my sister-in-law asked a question along the lines of "how can you guys bless others with this place?"

Regardless of what you have, but I think particularly so of land, I believe God has placed us as His stewards over it.  We simply are the caretakers of what shall one day slip through our fingers.  The question is what do you do with what God has given you?  Abuse?  Neglect? Make it better or worse than when you received it?  I guess that's a question with differing interpretations of "better".  I know that we feel blessed by what He has given us here on the Hill so we are always looking for ways to, in turn, use it to bless others.

So when my wife caught on that a young friend of hers from our church was looking for the perfect, yet unorthodox, place for a wedding, my wife volunteered our barn.  With a little bit of preparation, and a lot of hay removal, the couple which we had come to know well in the 20s ministry we led were united.

In a barn.
On a perfect September day. 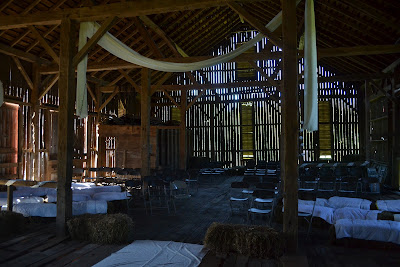 And as I sat there, on a bale of hay, taking in the surreal nature of it all I couldn't help but find a great deal of satisfaction in just having the opportunity to be a small part of their day....by sharing what God has given us to enjoy.  And in turn, I got to hear a strings trio echo in the old hand-hewn rafters.

And as I was tallying the numbers in each barn bay, it was a relief to know the structural capacity of the barn floor withstood 140 people.  Whew.  Congratulations Lizzey & Troy!
at October 06, 2012 No comments: