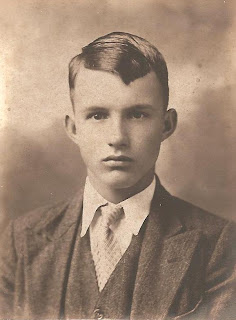 Tomorrow marks the 100th anniversary of my patriarch-grandfather's birth.  On June 28, 1912 "Jack" was born in a small farmhouse southeast of Argos, Indiana.  He was the youngest, and ornriest, of four children that they referred to as "the stair steps".

Grandpa relayed stories from his cantankerous youth to me often.  There was the time he hoisted livestock to the rooftops of unsuspecting farmers.  And the times they would relocate outhouses only a few feet and hope that the night-time user would fall to a surprise.  Or sometimes they would hoist the outhouses to house rooftops.  And one time during a big Fourth of July celebration in downtown Argos he and some friends rounded up a number of stray cats and dogs and set the dogs loose chasing the cats through the legs of horses attached to buggies that were lined up downtown.  He mentioned that one often, which tells me it must have provided great pleasure to the prankster boys watching the mahem unfold.

Somehow he got my grandmother, a gentle and calming soul, to marry him.

Gramps loved horses, cigars, his truckpatch, chewing tobacco "grandpa's candy", and Ford trucks.  He would never touch a drop of alchohal and stayed clear of places that served it.  He reroofed his house at 78 and outlived my other grandparents by more than 15 years.

Without thinking about this centennial I'm sure, my aunt planned the first gathering of this clan....our first reunion.....this Saturday at our farm.  I'm sure if he would have made it to 100 he would be pleased to meet all of his great-grandkids, particularly his namesake-my Jack, and would be cooking up pranks to pull.

Email ThisBlogThis!Share to TwitterShare to FacebookShare to Pinterest
Labels: genealogy

I mentioned briefly a few posts ago about the return of the barn owls to Sycamore Hill.  Most people we tell either don't care or feign interest.  Some people think it is kinda cool.....but for the most part, aww...it's just another bird.

But barn owls are scarce in these parts......scarce in all of Indiana, but particularly up north.

Two years ago when the owls first made an appearance, we couldn't for the life of us figure out what they were.  Every night, like clockwork, the two birds would start sqauwking back and forth to each other....well, I say squawk...it really was like a screeching squawk if that's possible.  We were tormented by these two birds for the longest time because they called to each other about every 10 seconds for a few hours until about 2:00 a.m.  And then sometimes they would start again at 4ish.  When I did some on-line investigating, believing that they were owls or some form of nighthawk, I came across two sites that offered sound recordings of pairs of mating barn owls.  And when I played the recording my wife thought they were in my office.  Barn Owls.  They couldn't have been anything else.

So I mentioned it to a fellow birder and a friend who had a few vacant barns south of us.  We looked and never saw a nest, nor were they nesting in our barn.  We assumed a tree or a building further away.  We didn't hear the birds after about the end of July that year.  About that time I submitted a summer bird count to our regional Audubon group.  Which prompted a phone call from Mr. Audubon.  He seemed to think I wouldn't know the difference between birds, and certainly I didn't see one.  By the end of the conversation I thought he came around.  But when the state list was published........my barn owls weren't on it.  Well to heck with that.

What I came to realize is how extremely rare these birds are.  In fact they haven't been recorded in our county since the 1970s and only about a dozen pairs are reported in Indiana in any given year.  Well, they didn't return in 2011.  But about mid-May this year....they were back.  This time fellow birder and I staked out the hill one night and saw both.  Our wives thought we were nuts.


So, understanding the unique situation we have, I made contact again with Audubon and this time with a barn owl specialist with DNR.  DNR's response was "do they hoot or screech".  Well, that was an insult to my intelligence.  Audubon never responded.  And when they finally did.....asserted skepticism.  Short of shooting one and sending it to them, I wasn't sure what they wanted from me.

Well, they wanted owl pellets.  These are the regurgitated remains of vermin the owls can't digest.  So I collected the owl pellets.  DNR asked me to take pictures.  They didn't like the way they looked.  They wanted a photograph of the owl-so I sent one I took at 9:45 p.m. It reminds me of those flying saucer photos.  I offered to send the 30 second recording I made, which is proof-positive, but they declined.  I asked if they had ever heard a pair calling back and forth-at which point to get me to shut up they asked if I wanted a barn owl box in my barn.  Maybe.

We had a couple of local Audubon folks out to scope out the birds.  Since they don't appear until almost 10:00 p.m. you never get a good look.  I've seen the whites of their faces and undersides....but mostly just silhouettes.  My birder friend and I are considering camo by the barn to get a better look.  Audubon has started to warm up and now I've gotten several requests to come look at the birds, but I'm concerned they are going to get spooked and leave or not come back again.....so I am limiting night activities and the owl viewing area has been closed.  I'm probably being a bit over-protective, but since no one believed me to start with....well, their loss.  I'm also starting to think "so much for the experts"....no one I've talked to has heard a pair hunting together at night.  And it seems that very few have even seen them.  I've lived with them for two summers.


The late night photo I took reminded me of something I've been telling folks now.  I think it would be easier to get Hoosiers to believe I saw a UFO than to get the people who should care to believe I saw a barn owl, let alone two.  So, we just sit back late at night with the windows open and enjoy listening to our alien visitors from another world.
at June 18, 2012 2 comments:

Recently I went on a flag binge and purchased 3 new flags........two of which were necessary.  There was a fourth flag I wanted that was a replica of an 1865 stars and strips, which would have been the year during which our farmhouse was constructed.  It was used for only three years, after Nevada became the 36th state, and replaced the flag most recognized during the Civil War.  Alas, it was $90 and I thought it would be hard to justify......at least for now. 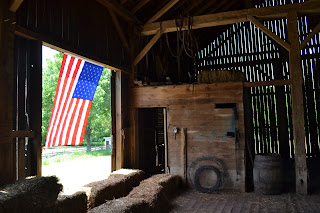 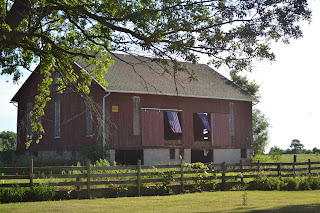 My step grandfather gave me a large state flag that was used for a ceremony in the State Capitol building once.  It needed an American flag to fly with it, so now the two grace the large barn door openings on the farm.  Perfect for holidays and family reunions.....but probably not weddings like we have coming up in September.