My Life in Cars

While I had my eyes on a sporty older Olds Cutlass to be my first set of wheels, my dad was pretty insistent that I buy a new car in an effort to avoid repairs and maintenance costs on a used car.  Well, that made sense to someone who knew he could afford to make the car payments….and well, duh, what guy wouldn't want a brand new set of wheels upon graduating from high school?  So about mid-summer after graduation I went car shopping and bought a new white Pontiac Grand Am.  It was a nice looking car-sporty, but some nod to class (as one girl called it).  That was good enough for me.


So, I began my new car payments.  $212.and some odd change.  I still remember that today.  I took my summer earnings, my graduation money, and most of my life savings and made the down payment….then drove the car off the lot.  I kept the car absolutely spotless and forbid anyone other than me to eat or drink in it for the first two years.  Then a buddy sitting shotgun once opened a can of pop and it exploded all over the seat and upholstery overhead….which never came clean.  After that-food was permitted.  I loved that car.  I would wax it in my parents garage and then turn down the lights so that it would glow.  It served me well as I commuted to Bethel College all four years, went on good and bad dates, made multiple trips into Chicago, South Carolina, Pennsylvania (twice), Missouri (twice), Kentucky, and plenty of places in between.  It was only in one wreck-when someone miscalculated and turned in front of me.  The down side?  Car payments for five years! And it seemed like no one else was ever willing to drive when a group of us would go out.  I thought that would change when I got my Mustang with a very small back seat-but nope.
My parents bought it off me and gave it to my brother, then he sold it a year later.  For a few years I would think that I’d catch a glimpse of it while I would be driving around town but I doubt she’s out there anymore-she’d be 25 years old and probably met her fate under the cash for clunker program.

Every guy has to have this moment, right?  Where they blow all their hard-earned cash on a new sports car.  I did this during the summer between my fourth and fifth years at Andrews.  I figured I had worked my butt off between full-time truckstop work, miscellaneous house painting and landscaping jobs, and working in the trustee’s office.  I was due a little something for myself.  So I started checking out the new Mustangs.  I was sold.  I ordered my all-black baby and then set off to get a pair of shades to fit the image.  A mere $120 for a pair of Gargoyles.  And then, knowing that I would also need to pick up some CDs for the new mega-bass stereo system, I went out and bought the latest U2 release.  Then I picked up my car.  Oh, baby-that was awesome!


But for some reason, I was still always the guy that got chosen to drive everywhere, even when three guys had to cram into the back seat of the mustang.  At least I had some pretty cool wheels to drive around.  I remember once getting a bit upset, since no one was allowed to drive it, when I left it at a buddy’s, Sean, while our class went to Milwaukee for our thesis projects.  We got back and the car was not where I left it.  It wasn’t even at his house!  Oh crap was I hot and it was going to hit the fan.  He thought he’d just take it out for a spin…come to find out, he was driving it to campus for classes and drag racing down US 31.  I think I would have gone nuts if it weren’t for the fact that I felt so sick to my stomach that I had to lay down on a couch until I had recovered.

After the Mustang I started driving a black F-150 extended cab pick-up....which I don't even have any pictures of, but it is the one vehicle I wished I had kept.  Today I drive a Mazda 626-which officially became the car I've driven the longest....4 years ago!  A political-consult of mine always suggests I just keep driving it, I supposed because it shows I'm common?  Well I may, until my son starts driving to high school in a few years.  He already knows it is waiting for him, and by then, at over 20 years old it will be a classic!
at November 30, 2012 6 comments:

Email ThisBlogThis!Share to TwitterShare to FacebookShare to Pinterest
Labels: growing up red white and blue

Part of the Family Business 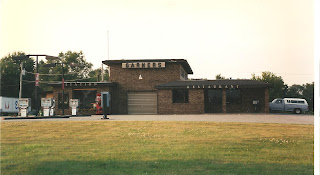 I’m not exactly sure how or where it began, but for more than half my life I identified myself more with our family business than anything else.  Many of my earliest memories conjure up memories of being in the kitchen at the truckstop, or behind the counter, or listening to the juke box from a booth.  The place was started by my grandfather in 1949 and continued by my dad.  It became a pile of rubble just a few years ago.  I've written some about the family business, including this three part story: History of Garners, Keep on Truckin', and The Boom Years.

I remember a night I spent at grandpa and grandma’s, and being awakened in the middle of the night I walked to the truckstop in the dark, at 4:00 in the morning because that is where I thought I was supposed to be.  I remember a few times being taken to the truckstop and sleeping in a booth during a third shift.  I remember helping myself to pickles out of the giant pickle barrel, chocolate ice cream from the soda fountain with marshmallow topping, and candy bars from the candy case.  I remember sitting in the large corner booth on Friday nights and eating fish sandwiches for supper.  When I was barely tall enough to reach the sink, I washed dishes on Saturdays and grandma would tell me at the end of the day to go to the station and ask grandpa how much I was worth that day.  It was usually a silver dollar.
Of course, I doubt I would have continued working there through high school and college if I had only earned a dollar a day.  My contribution was mostly in front of the three bowl stainless steel sink.  However, I did a fair share of grill cooking and spent one summer pumping gas.  Given the choice among the three, I would chose the grill.
I loved this place.  I loved the community that it offered by connecting me to neighbors, family, locals, and people from far away places.  There are so few of these places left.  It seems that the advancement of civilization almost assuredly has no need of places like this.  Well, at least they don't think they have the need....but I think we all agree that something is missing.
at November 29, 2012 6 comments: