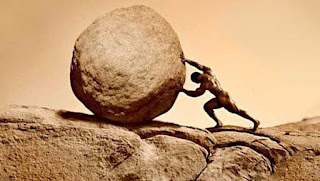 Here is the power of words.  Several years ago, a colleague far wiser, more mature with a few more gray hairs than I shared a story after I had expressed some frustration with the way things were “back home”.  She didn’t know that the story she shared almost 15 years ago, as brief as it was, would stick with me and I’d often repeat it giving her credit.  And as she relayed the story she said “she once heard” I didn’t realize the impact it would have.  I’ve recalled it time after time in greater frequency these last few years.

My colleague offered comfort with these words.  There was a man who was told by God to push against a boulder.  So he did, his whole life, push against that boulder.  When he died and was welcomed home by God, the man said all my life I pushed against the boulder but it never moved.  To which God responded, I didn’t tell you to move it.

I hated and loved this story at the same time.  I hated it because we all want to see the fruit of our labor, we don’t want to feel like our lives were wasted, we want to know our life had meaning, purpose.  I loved it because it demonstrated trust and obedience.  It leaves results to God.
My frustration with the lack of vision and leadership in Plymouth and Marshall County is no secret.  There are leaders who put an anchor around the neck of our future a long time ago.  Being at our annual conference reminds me of this again, as I ready myself to go back to pushing on the boulder.  Most people get re-energized at these conferences, but I get depressed and frankly, find it exhausting.  Too often I think “why not us?”

There were massive opportunities missed a decade ago, or more, but because of politics, we are living with the results.  The lack of decent housing, and our gateway hotels are the most obvious outcome of policies thwarted by the opposition.  And while the public decried the condition of our roads, a deteriorating condition and poor planning 20 years in the making, they doubled-down and rejected real change that would have brought a much higher level of expertise into road building.  We can’t be this gullible.  We can’t be this blind.  I can’t continue to run my head into a block wall.  I’m tired of pushing on the boulder.

Whether the frustration arises from missed opportunities to make our communities better places, to make the dollars we invest in our roads go further, to protect our culturally significant places, to motivate our churches to step up to meeting human needs, to stop archaic practices that undermine our property rights, the list goes on and on….the reality is that the boulder hasn’t moved.  And the landscape around the boulder is looking more desolate.

Just a few days ago, figuring that the wisdom of my colleague was one of oral tradition, I searched the simple line “I didn’t tell you to move the boulder” and sure enough, the search proved fruitful. But there were two parts she left out, one that was encouraging, and the other-an ending that seemed to dilute the power of the story.

So the story goes that a young man walked out of his cabin and God showed him a boulder in the valley.  And God told the man to push on the boulder, so he did day after day.  He became discouraged after a long, long time pushing on the boulder and was about to give up but first he prayed and asked God, why.  Why have you asked me to push on this boulder if it cannot be moved?  And God responded, son, I didn’t ask you to move the boulder but just push on it.  Confused, the young man asked but why?  And God said look at your arms, your back, look at the strength that you’ve gained in your legs, the calluses on your hands.  Look at how your obedience has led to perseverance under pressure.  Through opposition you have grown much and your abilities now surpass that which you used to have.  This is not failure.  And I thought to myself after reading this, please God, let me see this in myself because the boulder only seems to be getting bigger.

The story’s ending, at least in one version I read, was sadly disappointing.  While I’m sure it was meant to inspire-and I’m sure a number of tired pushers it did-it left me realizing how much we mere mortals want to be gods.  We want our will.  The story ended by God saying to the young man “now watch me move the boulder” as if obedience wasn’t enough.  Not my will, but thine be done.  God, as much aggravation that may come from pushing the boulder, let me still be obedient.  Let the results of my labor be in demonstrating obedience, not in my expectations.  And not in the expectation of others, most particularly.  If anything, let others see obedience as the most important thing, not the inch or mile the boulder may be moved…if moved at all.  That the example of obedience may be the inspiration others need to move mountains.

I hate politics.  I hate what I have seen in local, state and national politics over the last several years.  I can use hate because it is, in many aspects, sin.  It has held Plymouth and our county back in ways we can’t practically enumerate, but the desolation left around us is a witness against us.  I am tired of Christian culture that focuses on self, which can disguise itself as community if we’re not careful, and playing to that, churches operate as performance stages.  I detest this most unmovable boulder.  I find it demoralizing, strength-zapping, hopeless.  And too often I’ve complained to those around me, even encouraged others to find greener valleys where boulders don’t exist.  And then my mind goes back to the story my colleague told me those 15 years ago.  Just push.  Put a little more shoulder into it.  And maybe pray for more laborers.  I don’t care what party or church they come from if they help push the boulder.

Songs that changed the course of my 2018 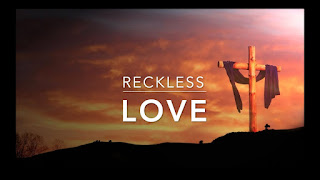 I won't forget it.

Walking into the doors of a church that would become our new family that first Sunday of 2018.  Broken, wounded, betrayed, scarred from years of cuts and just looking for a place to heal.  And one of the first songs played during worship was Reckless Love.  Neither of us had heard it before, but there it was, spilling out all of its truth, speaking directly to my heart and welling up in my eyes.

"Oh the overwhelming, never-ending, reckless love of God
Oh it chases me down, fights 'til I'm found, leaves the ninety-nine"

All along, I was expecting those who had hurt us to make things right, to "leave the ninety-nine" and fight for us.  It might have been right to expect that.  Guys get angry when they're hurt and expect to be "righted".  The reality was, God was leaving the ninety-nine to rescue the one.  Rescued into another fold.

And that's what God had to do in order to put us in a better place.  Somewhere, as I described to friends after that Sunday, a "place that I could breath again".  How often do we displace our trust and expectations onto those who disappoint us, when in fact, we know that only God can rescue, only God can heal. 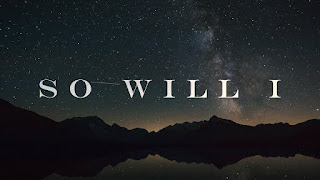 Within a few weeks, a friend shared a song on Facebook that again, I had never heard before.  The video that ran with So Will I reminded me so fully of our connected-ness to all things God created, my brothers and sisters around the globe.  Those next door who need that simple act of compassion, all created in His image, all "immortal horrors or everlasting splendors" - C.S. Lewis.

"I can see Your heart eight billion different ways.
Every precious one, a child You died to save.
If you gave Your life to love them so will I.
....
You're the One who never leaves the one behind."

And as the flood waters rose in 2018, and I watched people act on that divine character of God, compassion, I realized that nothing else in 2018 mattered more than, well, people.  As obvious as that seems, how often do we really act upon that truth?

Some of the lyrics to that song came back to mind on a short hike this fall because of a conversation I had with a friend about how we think of our lives in relationship to our Creator.

God doesn't call us to brokenness to leave us broken, He doesn't call us into submission to leave us without a mission.  God calls us to live out, to be all, that He created us to be.  Through every talent, in every relationship, each interaction and moment of inspiration-God is saying live in the fullness of the life He created for you.  And in that-we reflect His glory, we worship Him.